Nadema Agard, Director of Red Earth Studio Consulting/Productions can be contacted at: 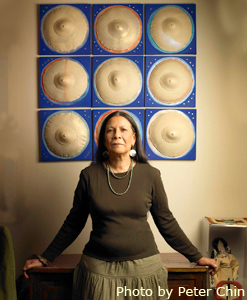 I was inspired by the portrayal of Coyolxauhqui during the Coatlicue Theatre Company performance for their tribute to Tonanzin/Virgin of Guadalupe in 2001. They made Coyolxauhqui so real and relevant to the lives as mature women. Also seeing her visually portrayed with her flattened and pendulant breasts reinforced her relationship to Grandmother Moon for whom we had ceremonies in the Great Lake Woodlands of Minnesota. I was even inspired to write this poem:

Coyolxauhqui Breasts from Virgin Rapture: A Compilation of Writings by a Virginphile ©2001.

As a young woman I was impressed with the multi-breasted image of Diana, the moon goddess and huntress at Villa D’este in Tivoli Gardens outside of Rome and never forgot her voluptuous and nurturing image.

Hina came into my life through the images of Paul Gauguin and through the words of Dr. Liliukala Kame'eleihiwa when she spoke of "Na Wahine Kapu - Divine Hawaiian Women". Lastly, I understood why sacred Samoan bark cloth (siapo) was a gift to me when Dr. Kame'eleihiwa described her as the one "who beats kappa (bark cloth) in the moon".

It was my Samoan goddess-daughters, Dr. Anne Marie Tupuola and Susana Lei'ataua who played a special role in revealing the origin of the 'siapo' as Savaii, the home of their Goddess of the Underworld, Nafanua and the place that is believed to be where the genesis of the Polynesian people took place.

Corral Calcium, so now I understand because the body of Hina is Corral!